Dean and Kathleen Winkelmann began making music together during the late 1970’s. With an eclectic blend of styles, from jazz to rock to country to folk, they’ve managed to transcend musical and generational boundaries, due in large part to their outgoing personalities and a unique ability to relate with their audience. Combined with a dynamic musical presentation, an evening with “DUSK”, as they were known, became a favorite among fans everywhere.
The story begins in 1977 at Kuglitch’s bowling alley just outside of Milwaukee WI. At that time Kathleen split her duties between singing and waiting tables.

In no time at all, they became a hit and moved on to perform regularly at several other venues in and around the Milwaukee area. 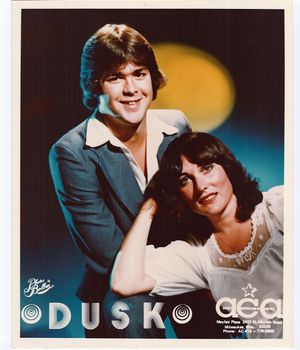 Within a year, they were traveling the country with hardly a break for the next 4 years. 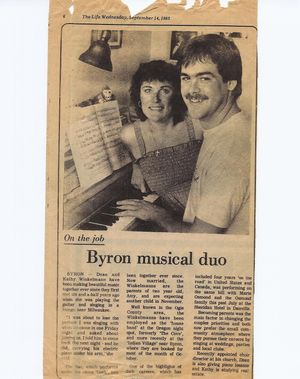 Married in 1981, they moved their base of operation to Byron Ill. Still continuing to travel, they began to establish roots and by 1987, now with three small children, they were able to stop touring altogether, Performing in and around Rockford IL and the western suburbs of Chicago. 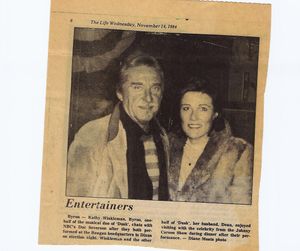 During that time Dean and Kathleen opened for acts such as Doc Severinson, B J Thomas, Three Dog Night,. The Byrds and others. They attracted the notice of former Beatles’ manager, Ken Mansfield, who in turn introduced them to legendary folk rock pioneer, John Beland of the Flying Burrito Brothers. They recorded two of John’s songs; “I Wonder Where We’d Be Tonght” and “I Feel a Sin Coming On”.
In the late 90's, the family moved to Branson MO where Dean was hired as musical director for the Kitty Kelly show. They returned to Milwaukee after several years in Branson to be with family.

In 2010, Dean & Kathleen relocated to Southwest Florida, performing more than 230 dates per year from Tampa to Naples until Kathleen's passing in 2022.
Today, Dean performs solo as Deano Uno (www.Deano.Uno) as well as with various Local  Artists.